Cholera, although it can kill an adult through dehydration in half a day, is easily treated. Yet in , some five hundred people died from cholera in the Orinoco Delta of eastern Venezuela.

In some communities, a third of the adults died in a single night, as anthropologist Charles Briggs and Clara Mantini-Briggs, a Venezuelan public health physician, reveal in their frontline report. Why, they ask in this moving and thought-provoking account, did so many die near the end of the twentieth century from a bacterial infection associated with the premodern past?

It was evident that the number of deaths resulted not only from inadequacies in medical services but also from the failure of public health officials to inform residents that cholera was likely to arrive.

Stories in the Time of Cholera

Briggs, the principal author, centers the book around what he calls "medical profiling": racialized public and professional narratives about the mostly indigenous "victims" of the Venezuelan epidemic. Ironically, cholera need not be fatal if patients are orally rehydrated, yet in Delta Amacuro, a state long neglected in public health outreach and national budgets, hundreds of Warao villagers died in a matter of months.

The book documents the role of official public health authorities and of the media in dividing the public into "sanitary citizens," with [End Page ] complex identities and nationality intact, and "unsanitary subjects," whose identity became reduced to stereotypes of race or class and associated with a predictable package of cultural beliefs and behaviors p. Venezuelans initially encountered cholera in the form of nationalist claims and rumors from remote borderlands—cholera literally threatened the body politic, violating borders and puncturing the image of modernity and scientific notions of progress so carefully cultivated by the government.

Bulletin of the History of Medicine

In the delta region, where the outbreak was most deadly, the indigenous population became cast in public statements and media accounts as an orientalist "other" set in contrast to, and outside of, the national project. Official narratives privileged cultural and behavioral explanations of the deadly epidemic e.

Such accounts, the authors note, decentered other interpretations, such as those based on underfunded sanitary and health infrastructure or the land and labor exploitation that have made poverty and malnutrition endemic to the delta. The text is replete with examples showing how the gaze of the media and health authorities tended to fixate on exotic features such as indigena spiritual and magical beliefs about the origins and treatment of disease—but in fact, as Briggs and Mantini-Briggs show, there were counternarratives for those who sought them out.

For example, the failure of male indigenous healers to cure the deadly diarrhea actually enhanced the power of women in the villages. As a result, women became the primary repositories of cultural memory about the epidemic. In a cautionary note to anthropologists, Briggs lays out the pitfalls of what he calls "cultural reasoning," in which the notion of culture becomes decontextualized and invoked in explaining complex issues. Part of achieving this end is to have the voices of the Warao heard as a counterpoint to the rhetoric of blaming the victim.

This book should be on the reading list of anyone who is concerned with globalization and issues of racism, equity, and the wellbeing of marginalized populations. 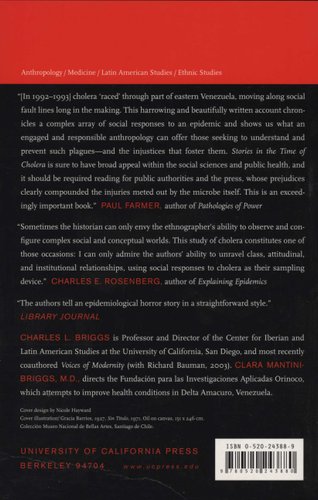 Forged from a partnership between a university press and a library, Project MUSE is a trusted part of the academic and scholarly community it serves. Built on the Johns Hopkins University Campus. This website uses cookies to ensure you get the best experience on our website.

Stories in the Time of Cholera : Racial Profiling during a Medical Nightmare - eqanepytod.gq

The Americas. In lieu of an abstract, here is a brief excerpt of the content: Reviewed by:. Kjell Enge.